Authors have always strived to have their stories illustrated. When words are reinforced with illustrations, the story comes to life. For writers, it is often hard to find succinct, concise expressions for complex scenes. For readers, the problem is even harder. Readers must imagine the story in their mind’s eye, keep track of details and make changes to the images in their minds as the story progresses.

Remember Alice in Wonderland and how well the drawings fit in with the text helping readers follow the storyline and create a magical world?

A picture tells more than a thousand words. A 3D model does even better. But what if you combine a three-dimensional model and its description? It gives the reader a sense the book is coming to life. Pop-up books engage readers visually and allow them to have a different physical experience with the book.

No wonder, the first movable books—that is, mechanical books (a common term for different types of interactive books, including pop-up books)—were written and illustrated by monks in the 13th century, 200 years before Gutenberg’s printing press. The first movable books were geared towards adults and not for entertaining children.

A famous example is Johann Remmelin’s 1613 medicine book, Captoptrum Microcosmicum. It contains a series of overlapping flaps representing layers of the human anatomy. These drawings of several layers served as visual interactive material of the human body for medical students. There were printed interactive solutions for such disciplines as astronomy, geometry, theology and technology to elucidate how things work.

Movable books remained mostly scholarly works until the 18th century. Various types of mechanical children’s books then gained popularity to become masterpieces of color, form and movement. Pop-up books with three-dimensional effects were introduced in the mid-19th century by Dean & Son. In 1929, the Daily Express Children’s Annual Number 1 was published as the authentic “pop-up” book; the three-dimensional illustrations automatically “popped up” and could be viewed from all four sides when the book was opened.

Pop-up books survived the radio and television era to become very popular in the mid-20th century because they allowed readers to interact directly with a story—something neither TV nor radio did.

What about the 21st century?

There are many gadgets: laptops, smartphones, tablets, VR helmets and others. Each of them can represent an interactive story designed as an app. Will pop-up book lose against digital storytelling or will it successfully compete against e-books?

To understand why augmented reality and pop-up books are a winning combination, let’s first look at some of the drawbacks of basic pop-up books:

However, we are convinced that, as with augmented reality-based learning, pop-up-book publishers can only win using these new technologies.

What does the augmented reality app do? It:

And many more features.

Pop-up books have a glorious history—interactive from their first appearance. They have fans among children and adults, thus ensuring they will remain popular for many years. However, we are convinced that a combination of a smart device, an augmented reality app and a book will expand a reader’s experience and grant authors more artistic freedom because they are no longer limited to the restrictions of the printable space. 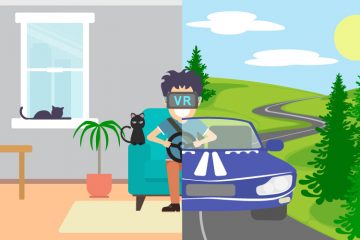