Home
/
Expertise
/
Indoor Positioning and Navigation Systems
/ Indoor Navigation Apps Designed For the Visually Challenged: Why Does The Market Need Them? 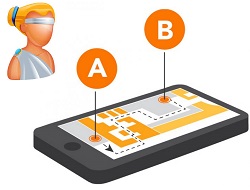 Present-day mobile GPS navigation apps are hard to imagine without pedestrian mode. This option has made our environment more accessible for visually-challenged people because they can reach points of destination with less effort. But what about the inner space of the destination points?

BLE beacons are the wireless technology that can really help visually-impaired people navigate independently inside buildings. The following is a discussion about why indoor navigation based on BLE beacons has great market potential and what features of mobile indoor navigation apps are practical for blind users.

Why do visually-challenged people need an indoor navigation app?

The main challenges for visually-impaired and blind people occur when trying to find their way in unfamiliar environments. They also struggle to orient themselves in places they had previously been to but where changes occur on a daily basis. Usually, these places are shopping malls, airports, and train stations.

Blind people must orient themselves in a vast space which is full of distractions: moving people, background music, announcements, different scents, etc. As a result, blind people cannot rely on their senses inside these places. In any case, they do not have much help in finding something specific like a clothing store on the third floor.

Why were there no apps for indoor navigation?

There were no technologies for the development of digital clues until recently. Although there had been several concepts aimed at solving the problem, the results were not satisfying for implementation on a larger scale. This is why:

A possible solution has been a Wi-Fi-based positioning system. However, its implementation and maintenance are expensive compared to other methods. Moreover, it consumes a lot of power. Wi-Fi hot spots need an instant connection with smartphones to calculate coordinates so they require heavy battery use.

On the other hand, BLE beacons are free from the above-mentioned drawbacks. They are tiny devices with low power consumption which transmit one-way signals. BLE beacons-based indoor navigation apps can help visually-impaired and blind people understand the surrounding world in a similar way as GPS technology already does (see more in the blog post iBeacon-Based Indoor Navigation: an Estimote Approach).

Moreover, since Apple introduced the iBeacons protocol in 2013, the BLE beacons market has been established with several participants like Estimote, indoo.rs, and Kontakt. This is why earlier this year Google also presented their own protocol, Eddystone, which makes it possible under certain conditions to utilize BLE signals without specific apps.

There have been big announcements of mobile navigation solutions built specifically to help blind people orient themselves indoors. These are pilot projects aimed at testing the BLE beacons-based approach.

indoo.rs has developed a solution for Terminal 2 at Los Angeles Airport. It has been designed as a mobile app with a voice assistant that helps visually-challenged travelers find their way to any location at the terminal.

Another project is an indoor navigation solution for the London tube called Wayfindr. It has been designed by the ustwo studio in close collaboration with the Royal London Society for Blind People. The developers successfully tested the new system in the Pimlico station in spring 2015. They launched Wayfindr as the first open navigation standard for blind people in October 2015.

How does it work?

For successful navigation, users need at least a smartphone with BLE onboard (iOS 7, Android 4.3 or later) and a pre-installed app. The app contains maps of the facility and it guides people via voice directions. This might not be comfortable for other people so the users need bone-conducting earbuds or Google Glass. This will make the directions inaudible for others, but the app’s users will still hear what is going on outside. Another option is a smart watch which receives directions from the smartphone app and transmits them as tactile signals.

The future of indoor navigation?

The possibility of an indoor navigation app that speaks sign language to the user has enormous market potential because:

a) When blind people can utilize everyday devices such as smartphones, smart watches, or earbuds they can do it discreetly. Therefore, they will not attract too much attention and thus feel more comfortable.

b) After successful testing, the app can be extended with further options like event triggers, context-based notifications, or notifications on remaining time before departure. Alternatively, a module for blind indoor navigation can be implemented into an existing app.

c) When the app helps orient and quickly find the destination point it will attract other user groups.

An indoor navigation app with a voice directions module is the next big thing. An app that helps blind people reach their points of destination or buy things must be as user-friendly as possible. And this way it will also be valuable for other groups of users. In return, this will help shopping malls make it easy for shoppers to find the stores they need and thus solidify their market position against online retail platforms.