In its life, a startup deals with hundreds of challenges, but none really matter if the startup loses its biggest battle: entering the market with a ready-for-use piece of software as soon as possible.

Although Scrum can hardly solve a startup’s problems if the idea is irrelevant or funds insufficient, it helps form—and keep on track—a team capable of providing timely delivery under changing requirements.

What is Scrum? Why use it? Where and how does Scrum help startups ensure consistent workflow between the startup and its outsourced development team? And, where doesn’t Scrum work? Read below.

Scrum is a framework for product development, united with similar approaches under a so-called Agile umbrella. 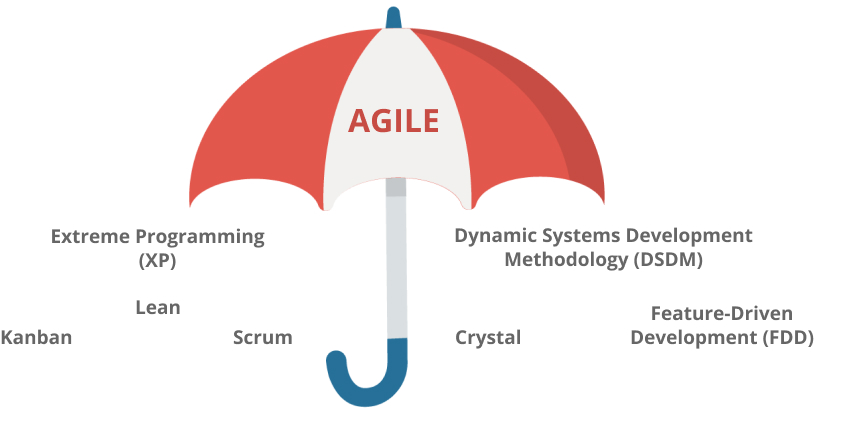 Scrum focuses on an iterative approach towards a clearly defined goal. A Scrum-based software development cycle is divided into Sprints (ranging from one week to one month—usually, two weeks). At the end of every Sprint, the development team ships a build (a feature or a part of working functionality), so everyone on the project immediately sees the result of the team’s work. This helps those involved stay motivated in the long run.

Also, the distinctive feature of Scrum framework is that the entire development team acts as a single, self-organizing unit with minimum hierarchy. There is no leader—all team members address problems on a project.

Why use Scrum on a project?

Scrum is a way of thinking on how to deliver relevant things to the user within a reasonable timeline. The Scrum framework is a profitable strategy in two scenarios:

for startup development when the product owner knows the necessary features for MVP (Minimum Viable Product) development and quickly makes changes to the software as soon as the team gets user feedback;

for a development team to deliver maximum business value reacting rapidly to any significant updates on the project.

Here is where Scrum boosts a business project

Unlike the Waterfall framework, where set-up requirements are not subject to revision, Agile considers a timely response to a change more important than strict adherence to the initial plan. Instead of sticking to a plan and implementing unrequested features, Scrum ensures the development team satisfies real market needs faster—absolutely crucial for startup survival.

Scrum is about active collaboration. The product team meets daily to review progress—or snags—on the project, plan, and assign tasks. Also, when a Sprint is over, the team gathers for a Sprint retrospective to reflect on challenges and wins, measure performance, and plan activities for the next Sprint. Constant communication ensures keeping up with constantly changing requirements.

Scrum encourages project awareness by every team member. Everyone shares trust but also responsibility for the end result. While the team is a self-organizing unit, the role of Scrum master is to ensure even distribution of risks and dependencies across the team. But the Scrum master is not a guide and does not push anyone to make any choice: team members decide and take responsibility for their decisions.

One of Scrum’s goals is to use work time as effectively as possible. In order to meet planned scope, developers need to stay focused on significant tasks. And, because the devil is in the details, they must also deal with small but necessary details. The only way to cope with it is to automate every routine. This eliminates time-consuming routine tasks and increases development time.

As discussed above, Scrum makes it possible to retain control over the software development process turning it into a harmonized workflow.

Through constant knowledge sharing, Scrum ensures that a team member’s absence (temporary or permanent) will not ruin established processes.

However, as with every framework, Scrum has limitations. The wide range of activities on different levels could lead to Agile failure.

Regulations and approvals do not support development at a rapid pace.

A Mars colonization project cannot be Agile. The same applies for projects based on strict requirements and thorough documentation, such as development of medical equipment, software for aircraft, etc., where there is a risk of exposing sensitive data, damaging human health, or even threatening life.

In this case, Waterfall is a reasonable alternative.

Scrum works for teams where everyone openly discusses any issues they encounter on a project. The essence of Scrum’s success is open communication and quick resolution of problems.

When two teams on a project or members within a team do not share updates (no trust established, bureaucracy, lack of vision—literally, a myriad reasons) or do not provide timely responses on important questions regarding the project, the development process loses its momentum.

When team members are clueless on how to use Scrum and/or consider daily meetings a waste of working time, Scrum won’t work. Neither will Scrum work when team members reject Scrum principles or follow them mechanically.

Scrum requires everyone in the team to be on board—to be aware of its principles, share a common vision on software development principles, and coordinate his or her activities with other members.

In the “World of Scrum,” striving for constant perfection prevents the team from delivering value and meeting the top priority for a startup’s potential success: getting the MVP into the market with alacrity.

The source code must look fine, but it should be only as precise as is possible at the current stage. Everything can change after a Sprint ends and a feature turns out to be unpopular.

For those in-demand features, there are brush-and-refactoring sessions when the team spends time on source code improvement.

No work on user feedback

Ignoring user feedback after launch of an MVP could well be the death knell of success for a startup. No startup can ignore what end users think about their software and still be successful. They need to collect user feedback and glean vital information as a basis for improvements. and incorporate them in the next release.

End users derive satisfaction that they helped by finding and reporting bugs and helping make improvements. If they are ignored and see no new improvements in subsequent releases, they will switch to a company that caters better to their needs.

It is also possible that an MVP gets negative feedback or goes unnoticed by its target audience. But when the team remains focused, works with the limited feedback received, and prepares for a product pivot and offers its target audience what they think they need, it turns an initial hiccup into success.

Scrum matters for those projects striving to rapidly respond to market needs/demands. It works best for MVP development providing a startup team with the mindset that enables them to successfully cope with many challenges.

How to Outsource App Development in 2020: To Succeed, You Must Follow These Four Points

How to Create a Fitness App: Steps, Facts, and Numbers

How Much Does Custom Software Development Cost?

Programming Outsourcing: What Is It? How Does It Help You?

Telemedicine App Development: Pipe Dream or Future of Good Healthcare for All?

What Type of Remote Development Team Do You Need? (And How You Make the Right Choice)

How Much Does It Cost to Develop On-Demand Delivery Application?

Logistics Software For Small Business - How It Saves Money

What is a minimum viable product?

What Is Logistics Management Software?

Creating an MVP for your Startup: Your How-to Guide

7 Steps You Must Take to Succeed in VR Game Development

Mobile App Development and Marketing: Do Not Reach Consumers, Make Them Reach You

Mobile Application Development - Why and How.

Can VoiP for Transport Companies Help Them Succeed?

How Ready is Last Mile Navigation for IoT Technology?

Precise Indoor Navigation - How To Be More Precise

The Evolution of GPS Technology

Riding the Trend of Custom Mobile Apps for Businesses