Why? Using Augmented Reality, every industry can transform traditional workflow by providing benefits unmet by other technologies today. Using AR glasses, engineers and operating personnel can immediately see all necessary information when needed: no cumbersome desktops for assembly instructions, operational diagrams and hundreds of other visualizations. Moreover, AR apps make it possible to compare the scheme to the result in a millisecond, take snapshots easily to prove the quality of work, and much more. As result of Augmented Reality use cases, industries enjoy increased workflow and decreased human-error factor.

AR for logistics and warehousing

Amazon, being one of the largest retailers worldwide, must operate efficiently inside an immense warehouse space. To make this happen, Amazon has patented several devices. By far the most interesting is AR Goggles: a pair of smart glasses, a “wearable” computer, and a dedicated app specially designed to introduce Augmented Reality to the logistics industry.

AR Goggles is intended to provide workers with navigational directions and instructions on how to get “there and back,” what product to take from a shelf, and which replacement to put on the shelf instead. Augmented Reality means for logistics companies they make their workers more efficient, so the workers need not lose time roaming through large spaces.

However, concern centers around the device itself. It has different sensors onboard to receive various data—data that might be used later to increase pressure on warehouse workers and management.

One scenario predicts that after the company has collected enough data, it will be used for machine learning to create optimal pathways through warehouses and ultimately replace human workers with robots.

Although, these scenarios might never become reality due to harsh critics on the company’s policies, as above, Amazon’s direction is clear: automation and effectiveness wherever and whenever possible.

Augmented Reality in medicine can be introduced for both staff training and workflow improvement.

An example of promising directions in AR for medicine is smart glasses with a specially designed AR app to support both logistics inside hospitals and when following sterile procedures.

Experiments in this area have already started by Fraunhofer Institute for Applied Information Technology. By starting small, AR developers focus on an app for medical staff to improve their in-depth knowledge by providing a set of visual assembly and disassembly instructions for surgical instrument sets and instructions on the sterilization process.

The AR app frees staff from monitors, keyboards, and the much-handled computer mouse ensuring high-sterilization standards and improved sterilization process, as employees do not get distracted every time they need to reference something. Also, they do not have to sterilize the large PC surface to maintain a germ-free environment.

Another planned app will help surgeons in the operating room by displaying visualizations like incision size and directions into a patient’s body.

While medical AR hardware needs better moisture resistance, and AR software must better recognize medical instruments (planned to be solved through introduction of barcodes), the benefits are huge: fewer distractions and faster workflow due to focus on the work process, as all instructions are projected in front of staff eyes.

Augmented Reality in the manufacturing industry

Augmented Reality is already extensively used for manufacturing as a tool for collaborative design and assembly instructions.

The list of application areas for AR in automotive industry keeps growing. TMD Friction Services, a worldwide-known brakes manufacturer has partnered with a software development company to produce proof of concept for a system of “virtual weighing” designed to mix and weigh raw materials to be used as constituent components for brake linings.

In both cases above, Augmented Reality  glasses are planned to replace desktop monitors in manufacturing industry while providing immediate visual instructions. Workers use Microsoft HoloLens to project the interface of a Unity-based app on different working areas, thus having all necessary information available at all time.

Back to barcode use: the app helps users identify raw materials through an integrated barcode scanner, and an interactive scale then tells how much of each raw material they must add to the mix.

To sum up, AR apps for AR glasses are replacing desktops in industry and manufacturing to ensure greater workflow flexibility. Any visual help instructions or directions become available right in front of employees’ eyes, when required, making it possible for them to be more productive and reduce risks of human error due to distraction. 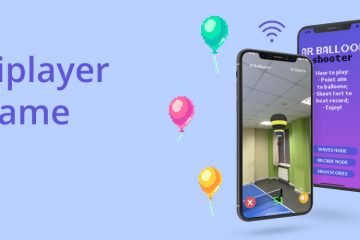